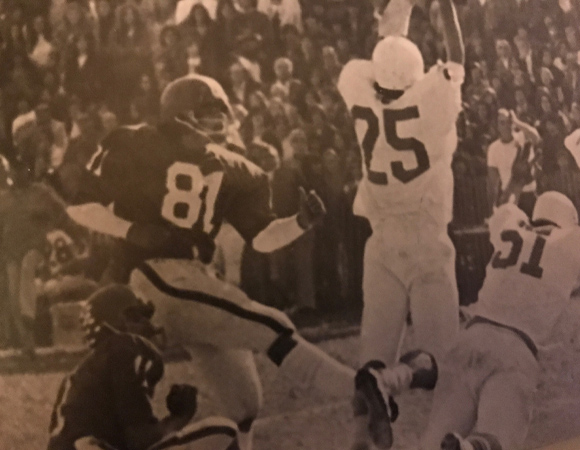 It's a "Jersey Thing"

I graduated from Essex Catholic High School in Newark, NJ. Sadly, my high school doesn’t exist any longer. Essex was in one of the worst sections of the city with rampant prostitution and drug dealing along with a bar called “Happy’s Inn”, all within a few yards from our school. Yet, Essex was a great place for working class kids in Northern New Jersey to find academic discipline, compete athletically and hopefully set themselves up for college.

Speaking of discipline, at Essex Catholic, we had something called JUG for "Justice Under God", or after-school detention, which I participated in on a regular basis. Some of us got indefinite JUG, which was detention until the Christian Brothers decided we were done. I was in JUG for a variety of reasons, including being late, goofing off, not shutting up in class and being a general nuisance. I also got JUG one time for cheating in a chemistry class because I wrote a “formula” on the inside of one of my father’s ties that I “borrowed.” (This is something I’m not proud of and would be mortified if one of my teenage sons did the same thing.) When my father found out, let’s just say he expressed himself in no uncertain terms. Can anyone say child protective services?
One time, I was talking incessantly in math class, and I remember Brother Cornell saying, “Mr. Adubato, I’m not sure why you are talking, but I am about to take this piece of chalk, throw it as hard as I can, to see if it can get stuck in your intricately styled hairdo.” (Give me a break, it was the 70s.)

And, I’ll never forget our football Coach Joe Marino who told me after my complaining about not enough playing time, “Adubato, if you played half as good as you talk, you’d be a decent football player.”

Talk about Jersey…check this one out. When I was in 6th grade at Ridge Street School in Newark, I liked Daria, she liked me, but a massive and very tough kid named Paul L. also liked her. Of course, she told him that she liked me (not smart), which Paul wasn’t happy about, so he told me to meet him at 3:30 p.m. for a “fight” on the corner of Grafton Avenue and Ridge. (What? I’m a lover, not a fighter.) But in Newark, you had no choice. You had to show up if challenged. Before I could get a word out, Paul hit me with a punch that I can still feel today. I was out cold, and my next-door neighbor Artie (one of the 30 kids gathered to watch this massacre…I mean fight), wheeled me home in a shopping cart, rang the doorbell and ran. P.S. I ran into Paul at our high school reunion who said he and his wife were “big fans” of my TV work and then said, “didn’t I kick your ass in 6th grade and Artie took you home in a shopping cart?” In front of his wife! Is that a “Jersey thing?”
And after high school, I had dreams of going to Princeton or at least Rutgers College in New Brunswick. But Princeton wasn’t in the cards (something to do with SAT scores and grades…imagine?) and Rutgers wait listed me. So, I wound up at Montclair State (a great school, but try finding a parking space back then…forget about it.) I remember thinking, “I should leave New Jersey for college.” You see, growing up in Jersey you can develop a bit of an “inferiority complex”. Like if you are doing it in New Jersey, it is somehow not good enough. (Can anyone relate?) So, I convinced myself that I would go “away” for school for my sophomore year. Enter, Iona College in New Rochelle, NY, which was run by the same Christian Brothers who ran my high school.

My plan was to play football for Iona (as I had at Montclair State) and to embrace this new experience. Yet, as hard as I tried, my New Rochelle experience never felt right. I wound up getting seriously injured, so my football dreams ended at 18, and I often felt isolated, lonely and somehow out of place.

So, what does a Jersey kid do when he strikes out? He comes back home. I returned to Montclair State my junior year and decided to embrace my roots. I wrote a political column for our college newspaper and connected with students from Bloomfield, Clifton, Newark and other places in Northern Jersey. Yes, it was provincial, but I was home and thriving. I became a student representative, ran for student body president, dated Donna, the hottest girl on campus who broke up with me when she moved to New York to pursue a modeling career. Later, I would marry twice. My first wife was from West Orange, and my wife now, Jennifer, is also from West Orange and the quintessential “Jersey Girl” who has made my life infinitely better. Oh yeah, I have four great kids. The rest, as they say, is history. I came to accept and embrace the reality that I belong here—in New Jersey. I am a “Jersey guy” and proud of it, but it took me a while to figure that out. It’s a “Jersey thing”, I guess.

What’s your most significant memory of growing up in New Jersey? Write to me at This email address is being protected from spambots. You need JavaScript enabled to view it.